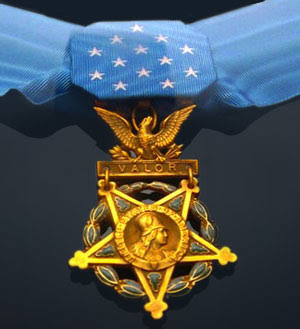 Today Wynken's Scout Troop was honored by a visit from a Medal of Honor recipient, Ronald E. Ray. The Medal of Honor is the highest decoration for bravery and heroics in the face of danger with selfless disregard for personal safety.

Here is the official photo courtesy of Wikemedia, and my poor cell phone picture of the real thing. 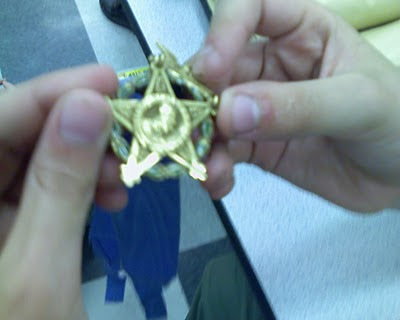 beyond the call of duty. Capt. Ray distinguished himself while serving as a platoon leader with Company A.

When 1 of his ambush patrols was attacked by an estimated reinforced Viet Cong company, Capt. Ray organized a reaction force and quickly moved through 2 kilometers of mountainous jungle terrain to the contact area. After breaking through the hostile lines to reach the beleaguered patrol, Capt. Ray began directing the reinforcement of the site.

When an enemy position pinned down 3 of his men with a heavy volume of automatic weapons fire, he silenced the emplacement with a grenade and killed 4 Viet Cong with his rifle fire. As medics were moving a casualty toward a sheltered position, they began receiving intense hostile fire.

While directing suppressive fire on the enemy position, Capt. Ray moved close enough to silence the enemy with a grenade. A few moments later Capt. Ray saw an enemy grenade land, unnoticed, near 2 of his men. Without hesitation or regard for his safety he dove between the grenade and the men, thus shielding them from the explosion while receiving wounds in his exposed feet and legs. He immediately sustained additional wounds in his legs from an enemy machinegun, but nevertheless he silenced the emplacement with another grenade.

Although suffering great pain from his wounds, Capt. Ray continued to direct his men, providing the outstanding courage and leadership they vitally needed, and prevented their annihilation by successfully leading them from their surrounded position.

Only after assuring that his platoon was no longer in immediate danger did he allow himself to be evacuated for medical treatment. By his gallantry at the risk of his life in the highest traditions of the military service, Capt. Ray has reflected great credit on himself, his unit, and the U.S. Army.

What should we call this unholy alliance between Nod's minions and the Mom's followers? I also think we need a logo to wear upon our capes.

Or we could recruit Fr Longenecker and bring the weight of his readership in behind us. He reads your blog. Send him an invitation to the Legion of Doom.

I saw what you wrote Fr L and sweetened the deal by offering him a bit of your beer and a Super Catholic cape. How can he refuse a sweet offer like that?

Ronald Ray...yes I know him and his story. I just confirmed that by checking the book, Medal of Honor, by Peter Collier. Ray served in the Ia Drang battles, which were the subject of We Were Soldiers, the book and the movie.

Re: Fr. Longenecker, he's a priest in my parish.

@kkollwitz - Ron is an amazing and very humble guy. We were very blessed to have him speak to our Troop.

He said he won't vote until my blog is in the running....I'm touched.