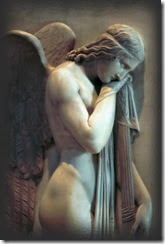 What's a Virtue? Other than the habit of doing good or moral excellence, the Virtues are second order angels, according to Thomas Aquinas. Virtue comes from the Latin root, "vir", meaning "man"; so virtue is an aspect of manliness or courage.

Virtues are known as the Spirits of Motion and control the elements. They are sometimes referred to as "the shining ones." They govern all nature. They have control over seasons, stars, moon; even the sun is subject to their command. They are also in charge of miracles and provide courage, grace, and valor.

Angels are powerful creatures; not to be trifled with. These are not fat baby angels with wings, these are celestial creatures that exude the Power of God with which they are imbued.

From Dionysius the Areopagite: [source]

"The name of the holy Virtues signifies a certain powerful and unshakable virility welling forth into all their Godlike energies; not being weak and feeble for any reception of the divine Illuminations granted to it; mounting upwards in fullness of power to an assimilation with God; never falling away from the Divine Life through its own weakness, but ascending unwaveringly to the superessential Virtue which is the Source of virtue: fashioning itself, as far as it may, in virtue; perfectly turned towards the Source of virtue, and flowing forth providentially to those below it, abundantly filling them with virtue."

The list of the seven virtues include the 3 Theological virtues of Faith, Hope, and Charity as well as the 4 Cardinal virtues of Prudence, Justice, Temperance, and Fortitude.
Posted by Nod at 11:42 PM

"the habit of doing good"

I have never seen it put so well....is this your own line? I want to use it in my Rel Ed class. I said a bit about this myself in a post which you aren't obligated to look at:

...the body can train the soul, that's why parents instill good habits in children, so that over time their bodies, physically trained in virtue, will likewise train their souls. Why, even Socrates knew as much, and he was just a pagan:

"Socrates, what should we aspire to?

You should aspire to be virtuous.

And how does one acquire virtue?

By doing what virtuous people do."

And in my own life I've stuck my neck out to do virtuous things I didn't want to do, only to discover that by the doing, my soul came to believe.

Thanks, kkollwitz. "The habit of doing good" was what I was always taught as how to develop virtue. Feel free to use it for yourself.

This reminded me of some discussions with Bible Christians who say all we have to do is "believe" to be saved.

Yes, but when I sin, am I not dis-believing God?

"Yes, but when I sin, am I not dis-believing God?"

Huh...you should be teaching a Sunday School class. No kidding. I bet you'd like it.