I have 5 gallons of beer fermenting in my basement, but apparently that's nothing compared to what the neighbors are doing; and by neighbors, I mean in the Sagittarius B2 region. 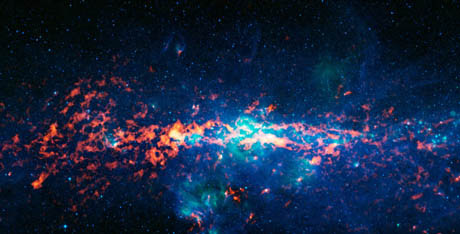 IMAGE: Colour-composite image of the Galactic Centre and Sagittarius B2 from the European Southern Observatory. Sagittarius B2 is a vast cloud of interstellar particles including alcohol in the form of methanol, ethanol, and vinyl ethanol.

So I guess God is the ultimate homebrewer?

Homebrew...you are way cool on my index.

As the famous philospher said: Mmmmm...beer.

If you're ever in the Old Dominion drop by for a homebrew.