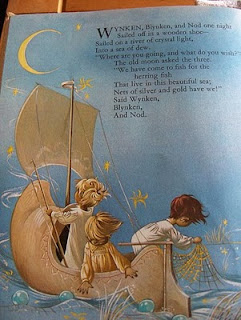 Wynken was on the Boy Scouts 100th Anniversary Camporee this weekend at Goshen. The last such Camporee was sometime back in 1970-something; the next one is likely not until the Boy Scouts' 150th anniversary. So, in that sense it was fairly historic.

The rest of the Nodlings were very occupied with our many coming and goings; birthday parties, pool openings, people going to and from the airport, and the like. A very busy weekend spent mostly without #1. That fact and aka the Mom's complaints of a girl-less fortnight got me to thinking.

In a big family, somebody's absence is actually quite noticeable. [I'm sure it's a lot noticeable in a small family, but I wouldn't know. ;-) ] The house just feels different depending on who is there and not there; the family dynamic changes dramatically, especially with the kids.

Wynken is both a bookworm and a night-owl. He's a smart kid with amazing long term recall. I am always the last man standing before bed, and I make periodic patrols of the house as I putter about. Many's the night when I have to "retire" a book from Wynken's hands to get him to go to sleep. When he's not here, everyone is asleep early.

Blynken is the ringleader for the other girls and a bit of an instigator. She is either sweet as sugar and the perfect playmate or the unseen hand for all the girl dust-ups. When she's not around, Nod-girl tends to wander about aimlessly claiming she's bored.

Nod-girl is the original drama queen. A typical middle child, neither big nor little. Emotionally sensitive, attention craving, both smart and creative, given to random acts of kindness. When she's not here, it feels like there is a vacuum between the Bigs and the Littles that needs filling.

Nub is our toddler on steroids. He is celebrating his third anniversary of his second birthday. A lovably cute boy with DS, he's got the strength and reach of a five year old with the understanding of a two year old. He is also our resident musician and people-watcher. Almost every toy he has makes music, which is what he loves. When he is not around there is a preternatural quiet which makes us 'start' suddenly, wondering where he is.

Nib is our impish little girl. She is the size of a pixie and as clever as a fox. She runs and skips around the house taking delight in every little thing. Most of what she does is unbearably cute, and she'll tell you so. "I cute!" How someone so small can make such a loud ruckus is beyond me. When she is not around, we start counting heads and wait for someone to come along to delight us with the joy of living.

Mrs. Nod is the one that everyone wants and needs, including me. Once she said it didn't seem like I needed her that much since I'm the extrovert, but I told her she is like a touchstone to which you have to keep returning in order to stay grounded. Nobody can bear to have her gone for long. It's tiring being everyone's number one, but fame and popularity has its price!

I can't imagine life without them, really. Every once in a while we get a glimpse of what that would actually be like, and it's just Wrong somehow.
Posted by Nod at 10:15 PM

What a sweet description of your family. Isn't it funny how just one child can change the dynamic of the family so dramatically?

Thanks for telling me to man up. I needed that.

In a big family, somebody's absence is actually quite noticeable...the family dynamic changes dramatically, especially with the kids.

Yes. We notice this too.