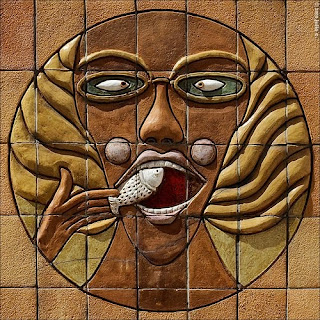 Other than Wynken, my fish-eater, the Nodlings think fish means fish sticks. So it came as a bit of a surprise when Mrs. Nod brought home several bags of fillets to fill the freezer. "Variety", she said. "Who are you?", said I.

Now of course I discover this on the day when the larder is practically empty. No vegetables, no real sides, and a couple of condiments. (The grocery check out guy thought $400 was a large order - ha!). I'm the designated weekend chef, but it was just me and an empty refrigerator. Tough sell.

But I'm nothing if not inventive. It's been said that I only know how to make one dish called: something similar. As in, this is something similar to something you may have had before, but not quite. So, I improvise a little.

Wynken will eat fish, and I remembered that Blynken recently discovered she likes tuna; if I can sell her, I can fake the rest of the Nodlings out. I defrosted a couple of sushi-grade Ahi Tuna steaks and seared them on a 500 degree grill for one minute on each side; then minced. I took the only two tablespoons of mayonnaise remaining in the house and combined. Meanwhile, I made some chicken flavored 10-minute rice on the stove as a filler.

I know from experience that presentation is everything when trying to get kids to try something new. So I grabbed some tortillas and quick heated them in the microwave. I put the rice onto the tortilla, added the tuna mix, quick chopped some iceberg lettuce on top, threw on a slather of ranch dressing, and just a dash of maple syrup for insurance. (Yes, it was just sitting there on the counter, don't look at me like that.) I rolled it all up and cut it fancy and served it as a wrap.

The Nodlings thought it was fantastic. I waited until they had wolfed most of it down before I told them that "seared tuna" meant "only cooked on the outside". Didn't matter -- they said I could make it again. Winner!

By the time my plate hit the counter we were all out of mayo. My wrap featured just rice, tuna, lettuce, ranch dressing, and sriracha hot sauce (oh, and a tiny dab of the maple syrup for giggles). The flavors went together surprisingly well.

So, it's not so much what you make, but what you make out of it that counts (on occasion). Happy eating!
Posted by Nod at 12:00 AM