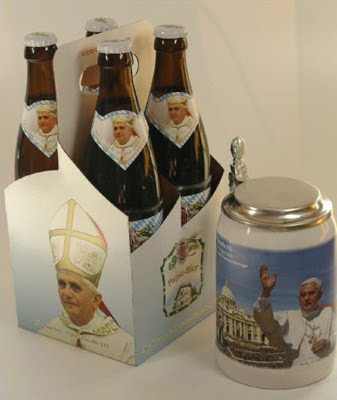 "We consider it to be our obligation to appreciate the election of a Bavarian Pope in a Bavarian way," says brewery Weideneder Bräu, which is local to where young Joe Ratzinger grew up. "The Pope’s Beer is a festival beer of highest quality containing only exquisite raw materials, presenting a mild character and a light colour, brewed strictly in accordance with the German beer purity law." h/t Ship of Fools

Speaking of the Pope, there is still time to vote WBN to victory in the Best Potpourri of Popery category. We are going strong, but we need to fight to the finish!

Vote! Vote! Vote! Minions awake! Then you too can share in basking in the glory of a truly pointless award. We wants it.

Aka The Mom is giving out donuts, WBN is offering homebrew!

I want some of that homebrew, but I live in Oklahoma where it is against the law to mail alcohol in or out. Since I'm part of the bloc, will you deliver mine in person?

Yes, but aren't you moving to Texas?

Nod - if the Mom wins the homebrew, I will graciously accept her award.

And I will let LarryD have it!

I see you're in the triple digits with a commanding lead.