The Pope's travel schedule for the next five months was published recently. I like to see it in pictures. The guy gets around. 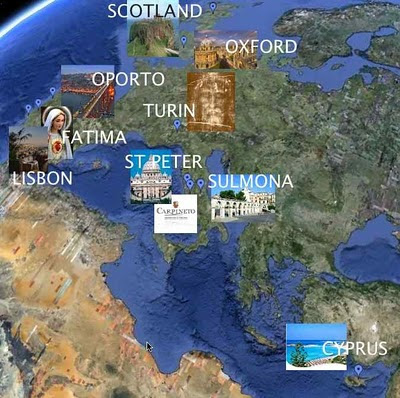 Vatican City, Apr 17, 2010 / 10:33 am (CNA/EWTN News).- As the Pope was preparing to leave for Malta Saturday afternoon, an outline of his schedule for the coming five months was released by the Vatican. Peppered among the four trips the Holy Father is scheduled to make by the end of September are a number of other events in Rome and the surrounding area.

The month of May will see the Holy Father in Turin to meet with the faithful and to venerate the Shroud (May 2) which is on temporary exposition. A pastoral visit will be made to Portugal from May 11-14, during which time he will be in Lisbon, Oporto and Fatima. Planned festivities include celebrations to mark the 10th anniversary of the beatification of Jacinta and Francisco Marto. Later in the month, on May 23, he will preside over Mass at St. Peter's Basilica on Pentecost Sunday.

In June, in addition to his trip to Cyprus (June 4-6) to present the Instrumentum Laboris for the October's Special Synod for the Middle East, the Pope will preside over six other celebrations, according to the official agenda. Among the most notable of these are a prayer vigil and Mass with priests taking part in the International Theological Convention for the conclusion of the Year for Priests (June 9-11) and a Mass for priestly and deaconate ordinations for the Diocese of Rome (June 20).

July and August have only one announced event each. On Sunday, July 4 the Holy Father will make a Pastoral Visit to Sulmona, Italy, in the Abruzzo region, to celebrate the 800th year since the birth of Pope St. Peter Celestine V. The local parish of St. Thomas of Villanova will host Pope Benedict on August 15, where he will preside over Mass.

During the month of September, he is planning one local and one international visit. On Sept. 5, Benedict XVI will go to Carpineto Romano, about 60 miles southeast of Rome, in observation of the 200th year since the birth of Pope Leo XIII. Later, from the 16-19 of the same month, he will travel to Great Britain to beatify Cardinal John Henry Newman, spending time in England and Scotland, where he will meet with Queen Elizabeth II.

This is why he hoped to retire to Bavaria, play Mozart & drink beer with his brother.

God forbid I should ever be so busy.

May God give him continued strength and a long life. We need him.

@barb - Amen. May the Lord preserve our Holy Father, Benedict.