Who's to say that shameless posturing, begging, bribing, pandering, and incessant nagging don't get you anywhere? The final results are in from The Crescat's 2010 Cannonball Catholic Blog Awards.

Sean over at the Catholic Roundup has a podcast with none other than Kat, The Crescat herself, as his guest to announce the winners; Kat says that she would like "to confirm that I DO NOT sound like Kathleen Turner after smoking a carton of cigarettes and a night of hard drinking" -- although we would have laughed if she had.

Remember that half the fun was not taking yourself too seriously and a chance to get introduced to some great Catholic blogs out there that you otherwise wouldn't have known about. You gotta keep the funny in mind!

One spoiler, WBN is the winner in Best Potpourri of Popery! Thanks to all the little people (by that I mean the Nodlings who are all under four feet high). This virtual award is gonna look great next to my other imaginary accomplishments. 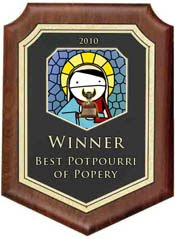 Oh, and the Chicago-land style voting didn't hurt either. A big shout out to my peeps in the Cannonball Voting Bloc: LarryD, Acts of the Apostasy: winner Snarkiest Blog; Aka the Mom, Shoved To Them: winner Best Under-Appreciated Blog; Joe, Defend Us In Battle: runner up Best New Kid On The Block. (The Machine can even crush a Bloc in Chicago-land ...)

Thanks again, and the homebrew will be ready in about four weeks; if you start biking now, you'll be here just in time.
Posted by Nod at 10:37 PM

My favorite part of the podcast is how she has no idea who you or I are. LarryD...she knows. Us...not so much, and she seemed a bit confused by my blog's title. That's okay though, because we're on the radar for next year.

Ha! Ha! Yep, and I got identified as "she". Hey, at least she liked my Tagline: Funny, then series, and with a case of the munchies!

the Mom - feel free to ride my coattails. LOL!!