~1~
My friends are ... unusual. They like asking these extreme questions regarding the Catholic faith. My buddy asked what happens if you're hiking in the Himalayas and you get gored by a Yak and there's only an Orthodox priest to hear your dying Confession. Is that OK?

That led to this post on Catholic Worst Case Scenario Survival Tip #1. Check it out.

~2~
Ah November. One of the best times of the year. The turning of the leaves, the chill in the air, and Thanksgiving all turn our thoughts to ... coconut.

Seriously, I have no idea what makes me tick. I dig coconut. I crave Mounds candy bars, always get a coconut cream pie for my birthday, cook with coconut milk, munch on dried coconut, and so on. Did you know that they make coconut M&M's?  These things are DA BOMB! 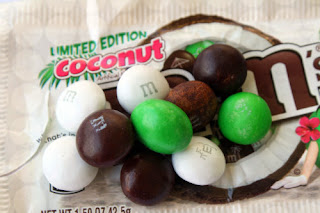 Tune in next time where I proclaim my love for mincemeat pie.  I know!

~3~
Decided to treat myself just a bit when I passed by the Art of Shaving store at the Mall. (Note to self -- if I never go to the Mall this time of year ever again, it will be too soon.) 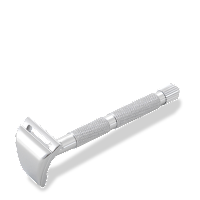 Anyway, since it's Movember, I get to grow my beard and mustache back for the cold months. This inevitably leads to trimming and shaping issues, which is why I went in the Art of Shaving store. I picked up this miniscule mustache razor that is for all those hard to reach places, like the corners of your mouth.

I've always been attracted to the idea of straight razor shaving, but while there are little Nodlings in the house, prudence must prevail.  A small mustache safety razor isn't so bad though, right?

I finally took the time to try it out properly: hot water, pre-shave oil, shave lather, shaving with and then against the grain, and finally after-shave lotion. I can honestly say my face feels awesome. It's a bit time consuming to do it "properly", but the results are fantastic. Can't say it'll be my everyday, but definitely worth it for those special times you want to look your best.

~4~
With regards to action adventure, pound for pound, you just can't beat the Bible.  These stories always inspire, awe, or otherwise engage man on a visceral level. Truth, fiction, allegory, or something greater -- they capture the imagination.

Director Darren Aronofsky and Paramount are making Noah, starring Russell Crowe; albeit not without some controversy. It remains to be seen whether it is merely an apocalyptic action adventure or a dramatic Bible retelling. It looks to be a spectacle either way.

One of my favorite board games is Empire Builder by Mayfair. It takes a couple of hours to play as you have to build railroad track for your train as you go, picking up commodities and selling them in different cities for a payoff.  It's a "serious" game in that you have to plan, allocate resources, and make decisions, but it's simple enough that a young teen or pre-teen can play it without much difficulty. 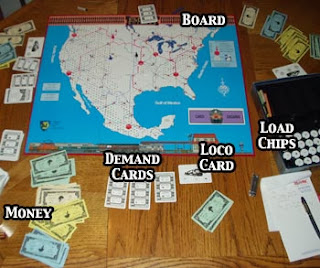 Plus you get to draw with crayons on the board. I've played computer versions of this game, but I keep coming back to the waxed board and the wipe-off crayons. Similar to crossword puzzles, some things are best in their tactile form.

~6~
Our bishop wrote us a Pastoral Letter to mark the end of the Year of Faith: Go Forth With Hearts on Fire: A Pastoral Letter on the New Evangelization. This is very cool, as I don't think this kind of thing happens very often.

It's a little bit like when the Pope writes an Encyclical, but this one is aimed at just our diocese.  Now that we've spent a year reflecting on faith, he wants us to go out and evangelize.

Subscribe to Wynken, Blynken, and Nod via RSS here! Then check out other 7 quick takes at: Conversion Diary.
Posted by Nod at 2:37 AM No comments:

A buddy of mine recently posed this scenario: 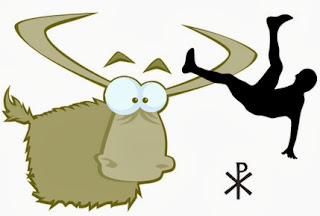 You are a Catholic hiking in a remote section of the Himalayan region of south Central Asia or perhaps Russia when you unexpectedly startle a local Yak herd. In the ensuing stampede you are gored by a Yak bull and seriously injured.

You are afraid you may die and you are aware of a serious sin on your conscience. The herdsman applies basic first aid and carries you down the hill to the nearest Orthodox church. The priest rushes to your side and offers to hear your confession.

As a Catholic, can this Orthodox priest shrive you?


Wow. That's actually a pretty bad Catholic worst case scenario. What's a body to do? The good news is that Orthodox priests are validly ordained and have valid sacraments. Ergo, an Orthodox priest can forgive sins. The bad news is that the Orthodox church is not presently in communion with the Pope as the Supreme Pontiff of the Universal Church, so their sacraments are not considered licit (legal) for Catholics.


The Code of Canon Law states:
Can. 966 §1 For the valid absolution of sins, it is required that, in addition to the power of order, the minister has the faculty to exercise that power in respect of the faithful to whom he gives absolution.

So the short answer is -- in normal circumstances: No.  Although the Orthodox priest has the power to forgive sins, he does not have jurisdiction over Catholics.

However, this is anything but a normal circumstance. You've just been gored by a Yak. Shouldn't that be taken into consideration?


The Code of Canon Law makes one exception for emergency circumstances:
Can. 976  Even though he lacks the faculty to hear confession, any priest validly and licitly absolves from any kind of censures and sins any penitent who is in danger of death, even if an approved priest is present.

So, in the case of emergencies where death is possible, then yes, an Orthodox priest can hear a Catholic's confession -- just as any validly ordained priest may hear a confession.


If your gore is gory and the perp's a Yak,
strive to shrive to the priest in black.

Subscribe to Wynken, Blynken, and Nod via RSS here!
Posted by Nod at 11:13 PM No comments:

Mrs. Nod and I watched the movie Superman: Man of Steel together recently.

One of the things I dig about her is that I never have to apologize for wanting to watch a superhero movie -- she's usually there ahead of me.

A pleasant surprise was the deliberate Christian religious allegory built in to the story. Yes, it is there in the original canon, but I appreciate the fact that director Zack Snyder chose to leave it in and even highlight it.

When Superman is debating giving himself up to save the human race, he seeks counsel in a church from a pastor. There is a very clearly framed shot of Superman in front of a stained glass window of Jesus praying in the garden of Gethsemane prior to His passion. Superman, like Christ, is sacrificing himself for a fearful and undeserving human race.

Superman also references the fact that he has been on Earth for "33 years" -- the same age as Christ when He underwent His passion.

Zod represents amorality and ends-justifies-the-means, while Superman represents restraint, compassion, and conscience throughout.

In the beginning of the film, Jor-El tells his wife that their son, Kal-El (aka Superman), will be "like a god" to men because of the incredible strength he will develop under Earth's yellow sun.  I'm not sure of the original etymology of the House of El in the literature, but "El" means "god" in Hebrew and other Semitic languages. The iconic "S" of Superman's family crest of the House of El means "hope" -- another messianic theme.

There is also a strong message against genetic breeding, biological determinism, and population control. The underwater chamber that all Kryptonians are born in is called the Genesis chamber; their lives and roles in society is predetermined. Superman's Kryptonian parents wanted their son to be born naturally and have the freedom to choose whom he would become.

Clark's biological parents and foster parents both emphasize strength of character as the defining characteristic they wish to instill in him. He, like Christ, is to be the model for all humans to emulate. Superman is also portrayed as a Noah figure, carrying the future of his people to safety in his "ark" while the old world is destroyed, as well as a Moses figure (baby in the bulrushes).  Noah and Moses are both archetypes of Christ.

So there is all that -- in addition to it being just a pretty awesome and well executed movie with lots of action and cool special effects.

Subscribe to Wynken, Blynken, and Nod via RSS here!
Posted by Nod at 10:52 PM 2 comments: