Christ is Risen! He is Risen Indeed!
(Traditional Greek Easter greeting) Picture of the Holy Sepulchre.

As a kid, every science fair I ever entered was done under protest. As a result, I either grew salt crystals or made some kind of dinosaur model. I was no budding scientist.

However, it was only after college that I discovered an interest and a modest talent for solving puzzles. Crosswords, word games, knots, sequences, mystery stories, archeology, computers -- and all things ancient Roman -- fascinating.

There are an equal number of kinds of puzzles that I'm no good at, but I do respect the craft.  One of the strangest I came across in a history article -- hair archeologist.  There really is something called a hair archeologist??

I've got no practical use for hairdressing, but I have 3 girl Nodlings who do, and I admire the forensic reconstruction this lady managed by studying marble statues and ancient coins. I give you mad props, Lady!


Janet Stephens, a Baltimore hairdresser and amateur archaeologist, has recreated the hairstyle of the Roman Vestal Virgins on a modern head — but it wasn't easy. After becoming inspired by an ancient portrait bust she saw at a local museum, Stephens tried to recreate the hairstyle at home, failing miserably.

She spent the next seven years conducting research in an effort to properly reconstruct the lost technique. And now, the results of her work have been published in the journal Roman Archaeology.

Here's the video of her doing it live:

Everybody's doing it, so that makes me no different. Saw this one and it cracked me up. Enjoy a laugh while we wait for our new Pope! 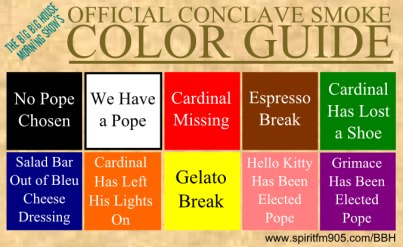