Papal Picture Of The Day

Don't forget to vote for Wynken, Blynken, and Nod, for Best Potpourri of Popery award. You can vote once a day and you don't have to sign up for anything. Help a struggling blogger get some recognition in the Catholic blogosphere's snarkiest awards contest. 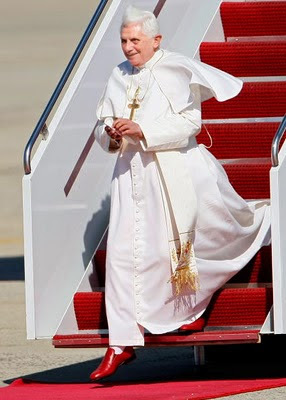 What's gold and white and red all over? The pope coming down the stairs. No, not funny, but dig those crazy red shoes!

[Wikipedia] The Papal shoes are the red leather outdoor shoes worn by the Pope. They should not be confused with the indoor papal slippers or the Episcopal sandals, which are the liturgical footwear proper to all Latin Rite bishops.

As did many noblemen, the Pope wore slippers (pantofole) inside his residences and leather shoes outside. The indoor papal slippers were made of red velvet or silk and were heavily decorated in gold braid, with a gold cross in the middle.

The Papal outdoor shoes were made of plain red Morocco leather and had a wide cross in gold braid. The cross once extended across the shoe and down to the sole. In the eighteenth century the ends of the cross were shortened, as shown in the photo of Pius VII's shoes. This old-fashioned type of dress shoe is very thin-soled and is sometimes called "pantofola liscia" or smooth slipper model.

After 1958, Pope John XXIII added gold buckles to the outdoor papal shoes, making them similar to the red shoes worn by cardinals outside of Rome.

Pope Paul VI eliminated the gold cross and completely discontinued the custom of kissing the papal foot. Paul VI can be seen wearing red buckled shoes in photographs from his 1964 trip to Jerusalem. In 1969, Paul VI abolished buckles from all ecclesiastical shoes, which had been customarily required at the Papal Court and for prelates. He also discontinued the use of the indoor velvet papal slippers and the Paschal mozzetta and shoes. Paul VI wore plain red leather shoes throughout the rest of his pontificate. Pope John Paul I, who was pope for only 33 days, continued wearing the plain red leather shoes worn by Paul VI. Early in his pontificate Pope John Paul II wore red shoes; however he quickly adopted wearing ordinary brown shoes. Paul VI, John Paul I, and John Paul II were buried in the red leather papal shoes.

The papal shoes, along with the camauro, papal mozzetta, and cloak (tabarro), are the only remnants of the former red color of the papal garments. St. Pope Pius V (1566 - 1572), who was a Dominican, changed the papal color to white, and it has remained so since.