The Virtues: Drop Dead And Other Age Appropriate Things

We don't know ahead of time when we will die, when the Lord will call us to account. Mrs. Nod has actually forbidden me from dying on pain of death. (I tried to reason with her about that one, but no luck.)

A 50-year old father at our Catholic school up and died suddenly this week. He leaves behind a grieving widow and at least two boys. Wynken and the other 5th - 8th graders attended the funeral Mass at the parish today. Wynken said that he was a bit sad about it and recalled two other funerals that he has attended: one was for a (former) classmate earlier this year (very sad), the other was for his great-grandmother when he was 5 years old. I told him it was OK to be sad, but that we had the hope of the Resurrection.

I remember when his great-grandmother (on his mother's side) died. We attended with Mrs. Nod's family, and we had to travel to West Virginia where Grandma was born and her husband was buried. My nephew who is 8 months younger than Wynken was there and during the wake the boys got into a heated argument.

It seems that his parents had told him that Grandma had "fallen asleep" and wouldn't wake up again, whereas I had gently but firmly told Wynken that Grandma had died, and answered any questions he had at the time. (I honestly don't remember what they were.)

I've always made it a policy to answer any direct questions my kids ask as simply and honestly as I can at an age appropriate level. I might not volunteer every bit of information I have, depending on their maturity, but I've never lied to my kids.

That, of course, is the tricky part: age-appropriate information. How do you determine what to tell your kids and when? Obviously this is going to vary from kid to kid and family to family, but there should be some general guidelines that you can follow. Also this week I've had to field questions about why people get divorced, and I've tap-danced around questions related to how babies come into the world. (On one occasion in mixed kid company I replied, "Oh, the usual way.")

A resource that I refer back to periodically is a book called Character Building: A Guide for Parents 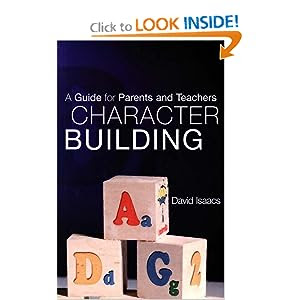 and Teachers by David Isaacs. It outlines the general virtues that parents should be developing in their children at various ages.

Up to 7 years old

"Until they are seven, children scarcely have the use of reason and therefore the best they can do is obey their educators and try to fulfill this duty with affection ... In any event, at all ages the merit lies in obeying whoever is in charge - provided that one is not asked to do something wrong. Obedience is produced by parents making reasonable demands. They will have to be very demanding - but only on a very limited number of points, giving very clear, precise instructions.

"Children could obey because they are afraid or because there is no way out. These are very lowgrade motives. They should be encouraged to obey out of love, to help their parents: this is the first step towards developing the virtue of generosity.

"At the same time we should develop in them the virtue of sincerity, because this requirement to do certain things (to obey) gradually has to be turned into a requirement to think ( a form of guidance), and this guidance by parents only makes sense if it is based on the child's real situation. Sincerity has also a lot to do with modesty and we will come back to this virtue at the teenage stage.

"We also include the virtue of order - for a number of reasons: 1) if it is not developed early on, it is much more difficult to develop it later; 2) it is a virtue necessary for people to get on well together; 3) it is good for mothers' peace of mind: and that, quite seriously, is something important.

Nod - this looks like a great resource. Not only for my kids, but to help me establish what are reasonable expectations. I think I often expect too much from a 4.5 year old, and it has gotten me (and him!) into trouble.