Of all the great imagery we have for Christ and his sacrifice for his bride, the Church, none springs to mind as little as the Pelican.

Lambs, crosses, bread and wine, the ichthys fish -- all these are very common images. But a number of other images have also been used throughout the centuries to represent Christ including birds, such as the mythic Phoenix and the pelican.

In the case of the pelican, the belief was that the bird would wound herself to feed her young with her own blood. This self-sacrifice naturally called to mind His death on the cross and so became a symbol for Christ.
This weekend, Mrs. Nod and I went to the Basilica of the National Shrine of Saint Elizabeth Ann Seton, the first native born saint in America. I found this etching of a pelican in the window pane of the entry door to the Basilica. 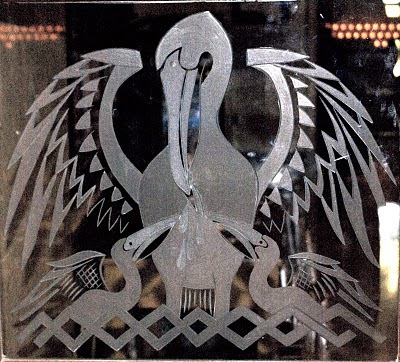 Things that are otherwise mysterious gain a new light when the proper signs and symbols are explained.
Posted by Nod at 11:58 PM

What a great etching! You are right, this symbol is such a unique one and, yet, so little used and known!

Thanks, Maia. I've actually updated the picture with a better one that I took; shows more detail.

Awesome, Rebecca, thank you! I know it's an anti-award, but I'm honored just to be nominated.

I'm gonna hang it right next to my Super Catholic t-shirt. :D

Super Catholic t-shirt? When you get serious about it they give you a cape.

Thanks for posting this. I have been a lot of pelicans lately! God bless!