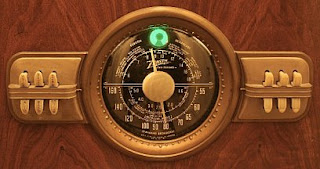 As a kid I would lie awake at night listening to the old time radio shows playing on K-XYZ AM nowhere. I'm not old enough to have heard these in their heyday, or even the sons of heyday, but I loved these over the top radio dramas that allowed you to exercise your imagination and get some cheap thrills.

I learned at the ear of radio about conning the marks in The Lives Harry Lime from The Third Man, foiled dastardly plots with Chuck Morgan and Glamour Puss in Stand By For Crime, defended the oppressed with Paladin in Have Gun Will Travel, and rode the dusty trails of justice with the Lone Ranger and Tonto; and I got my fill of Sherlock Holmes and the Green Hornet alike.

Radio can be intimate in a way that television is not, especially in the wee hours of the night. It's just that million dollar voice, the radio dial, and you. Radio lets you feel like you were in on the action even though your body couldn't be there.

I played some of these old time radio recordings for the Nodlings and they just ate it up. Six kids piled up on the couch to "watch" an iPad progress bar slowly marching across the screen as their grandfather's fairy tales crackled in their ears.

It's magic. It's hypnotic. I wish I could find a modern radio drama that was just as captivating. Or perhaps the charm of the old time radio is best left in the myth of yesteryear. In either case, you can stream them for free from archive.org. Yay, free!

I found this old video of Anton Karas playing the theme from The Third Man on the zither. It has a quaint yet upbeat sound that evokes old Vienna. The zither may be the most complicated string instrument I have ever seen: part harp, part bass, and part stringed guitar. Enjoy!