A Catholic In Every Church

This weekend the new Sikh temple that they have been working on for the last couple of years finally opened down the street. 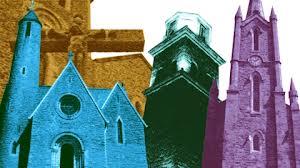 Why so many churches? I often wonder what it would be like if every church or temple was actually a Catholic church. I'd be walking to Mass for one thing.

Our church is pretty typical for our area, which means 5 Masses of 1000+ people every weekend and only 500 parking spaces. (Since we have over 15,000 registered parishioners, I have no idea where the other 10,000 people are going.)

So, if every church were Catholic, what would the average density be? What is a good size for a parish anyway? A lot of people complain that they feel isolated in our large Catholic churches, that they don't know the people the worship with, and don't feel connected to the larger parish family.

Lots of things can help with that of course. Getting involved for one. We have dozens and dozens of ministries at our parish. We have a school. We have youth groups, old people groups, charitable groups, prayer groups, mom's groups, Knights of Columbus groups, scouting groups, and so on and so forth. We have so many groups, in fact, that our pastor is sponsoring an "International Festival" to help unite the parish and make us a more cohesive group.

So if you feel left out, you're probably not trying very hard. That being said, we have an obligation to reach out to those brothers and sisters to make sure they are a healthy part of our parish family. The biggest disease we are fighting is apathy amongst our own members (remember those 10,000 missing parishioners?).

On the other extreme, I once visited West Virginia for a funeral, and had to drive two towns away to find the nearest Catholic church which was tiny and miniscule. Everyone turned around when we walked in for Mass. "You're not from around here, are you? Welcome."

Looks like we got some work to do around here before there is a Catholic church on every corner, and a (bunch of) Catholics in every church.

Our former pastor once said that Protestant churches didn't have the seven sacraments but they had perfected the sacrament of hospitality. Our church culture is different--we don't know the people with whom we worship, our parishes are big, and getting involved is extra, not integral. In many parishes you can attend for a long time and never be anything but a stranger.