Scientists have discovered that quantum jewels are quite possibly at the heart of reality as we know it.

"The amplituhedron looks like an intricate, multifaceted jewel in higher dimensions. Encoded in its volume are the most basic features of reality that can be calculated, “scattering amplitudes,” which represent the likelihood that a certain set of particles will turn into certain other particles upon colliding. These numbers are what particle physicists calculate and test to high precision at particle accelerators like the Large Hadron Collider in Switzerland." - Quanta Magazine


WBN is picking up the story since AoftheAP is on sabloggital.

This is huge in the field of quantum physics. Before the discovery of the amplituhedron, scientists had to calculate millions of terms and fill 500 pages of algebra to figure out simple particle physics. Now they can just calculate the volume of an amplituhedron in a single function.

How's that for new math?

The article goes on to say that space-time and therefore dimensions may be an illusion created by properties of the jewel itself. Even gravity.

Sister Ilia, keynote speaker at the Leadership Conference of Women Religious (LCWR) and  director of Catholic studies and visiting professor at Georgetown University in Washington, is quoted as saying:

Sister Ilia has a doctorate in pharmacology as well as historical theology. [WBN is of the opinion that partaking of too much pharma has influenced the dogma in this case.]

WBN also asked Internet Princess and  relativism researcher Ms. Mimi Maker about the impact of the jewel on teh intarwebs. "Gravity an illusion?", she said, "Without gravity there is no weight. No weight means: I can haz cupcake?"

Her colleague, Dr. Adam Smasher has this to say: "On a personal note, I would like to say that men everywhere can relax a bit since the discovery of the amplituhedron since everything is just a consequence of quantum geometry. Now we can say 'No, that dress does not make you look fat, it's an illusion of your quantum jewels.'"

Dr. Smasher continued, "One thing is certain now, Schrodinger can get his cat back; the cat is neither alive nor dead, but existing in a higher bejeweled state." 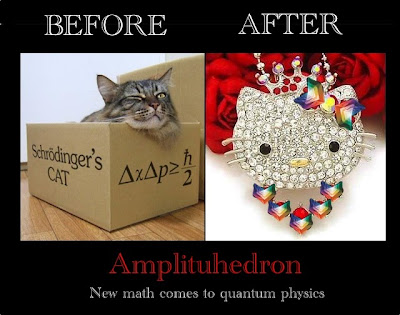 WBN has learned that news of the quantum jewel is even affecting the Catholic blogosphere. Rumor has it that celebrated author Rebecca Frech is working on a Second Edition of her book Teaching In Your Tiara: Quantum Bejeweled.
Popular blogger Terry Nelson of Abbey Roads fame is purported to have said, "Is this the line for the funnel cakes?"