Let's say you're a Catholic who has just arrived in the Land of Scorpions. Your great Uncle Rubin has recently died and left you a claim to a silver mine in his will.  After praying for the repose of his soul, you come down to Durango, Mexico to inspect your inheritance.

After confirming that it is an active silver mine you go into town to celebrate your good prospects and to raise a glass (or two!) in the cantina to your great Uncle Rubin. The next morning you wake fuzzy headed and with strange, painful welts on your arms. You decide that Alacrán de Durango doesn't mean Dance of the Scorpions and wasn't meant to be done with live scorpions in any case.

Overcome with remorse and more than a little worried about the welts on your arms you rush to the local Catholic church and line up for Confession. You jump into the box when you suddenly realize: not only does the priest not speak English, you don't speak any Spanish!

You exit the confessional looking woeful and confused. A friendly old Duranguense man who is next in line greets you in English and offers to translate your confession to the priest.

What's a body to do? Is it OK for this man to translate your confession? Does the seal of the confessional apply to your translator as well even though he isn't a priest? 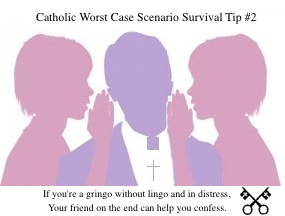 Things are looking pretty dicey indeed. But this Catholic worst case scenario survival tip is just what you need:


CIC, Canon 983.2 A penitent who does not speak the same language as the priest confessor may bring a translator into the confessional. In such a case, however, the translator is also bound by the seal of confession.
The same canon says that anyone who accidentally or purposely overhears another person's confession is bound by the seal to keep it a secret, even from the penitent.


So go ahead and 'fess up, partner. You get the grace of the sacrament, and your translator pal gets to keep your secret. Remember this Catholic Worst Case Scenario Survival Tip #2:


If you're a gringo without lingo and in distress,
Your friend on the end can help you confess.